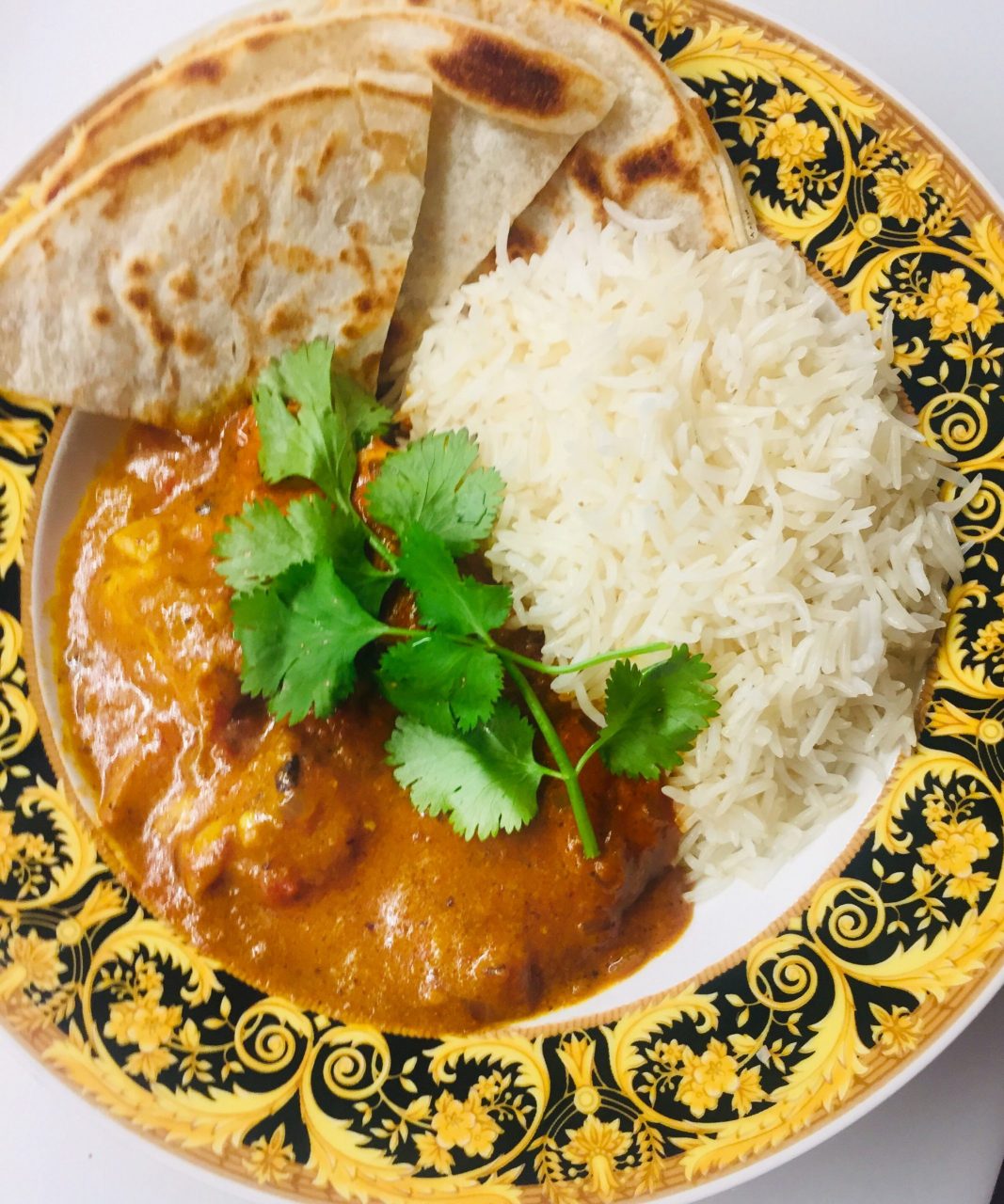 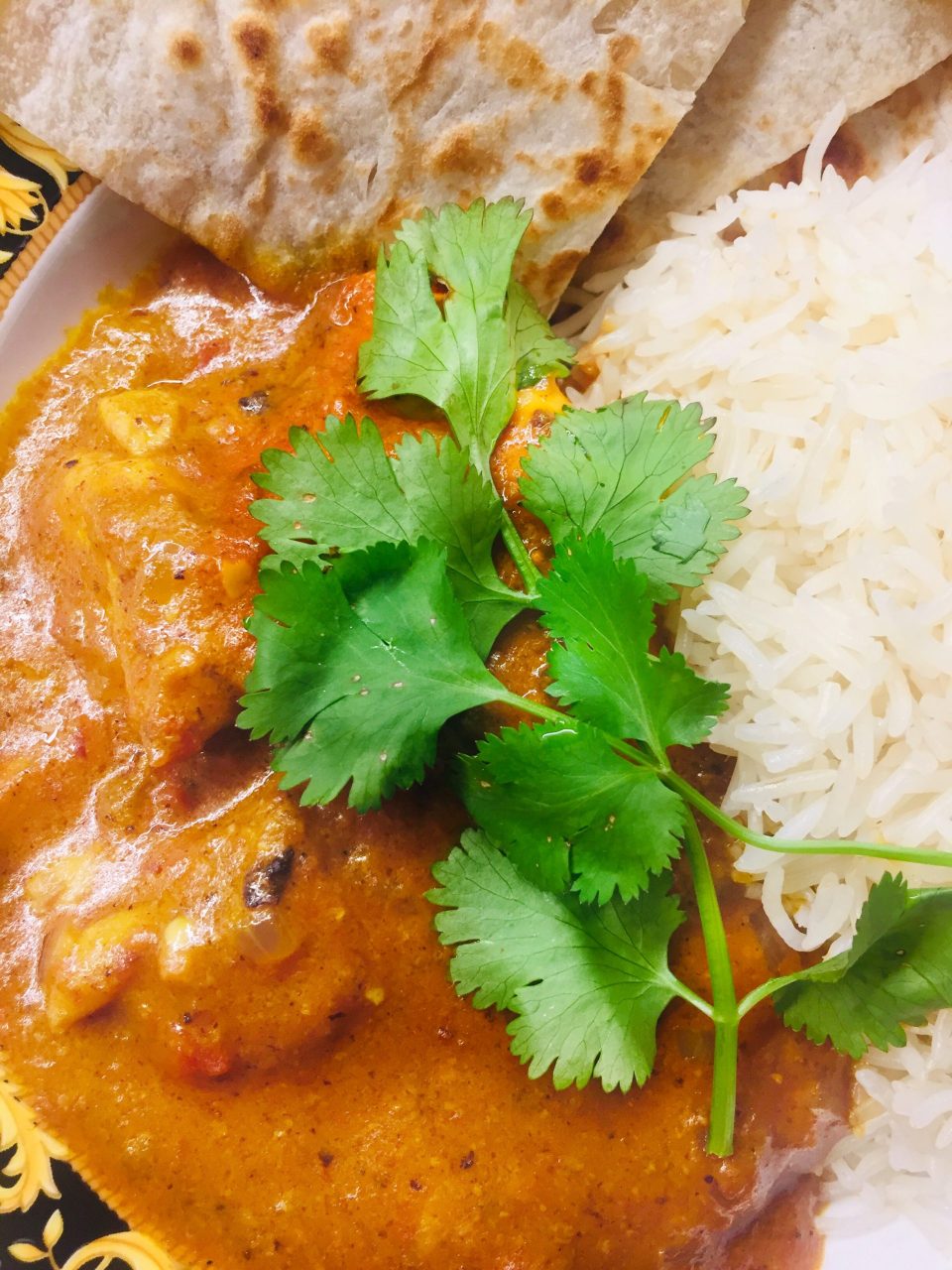 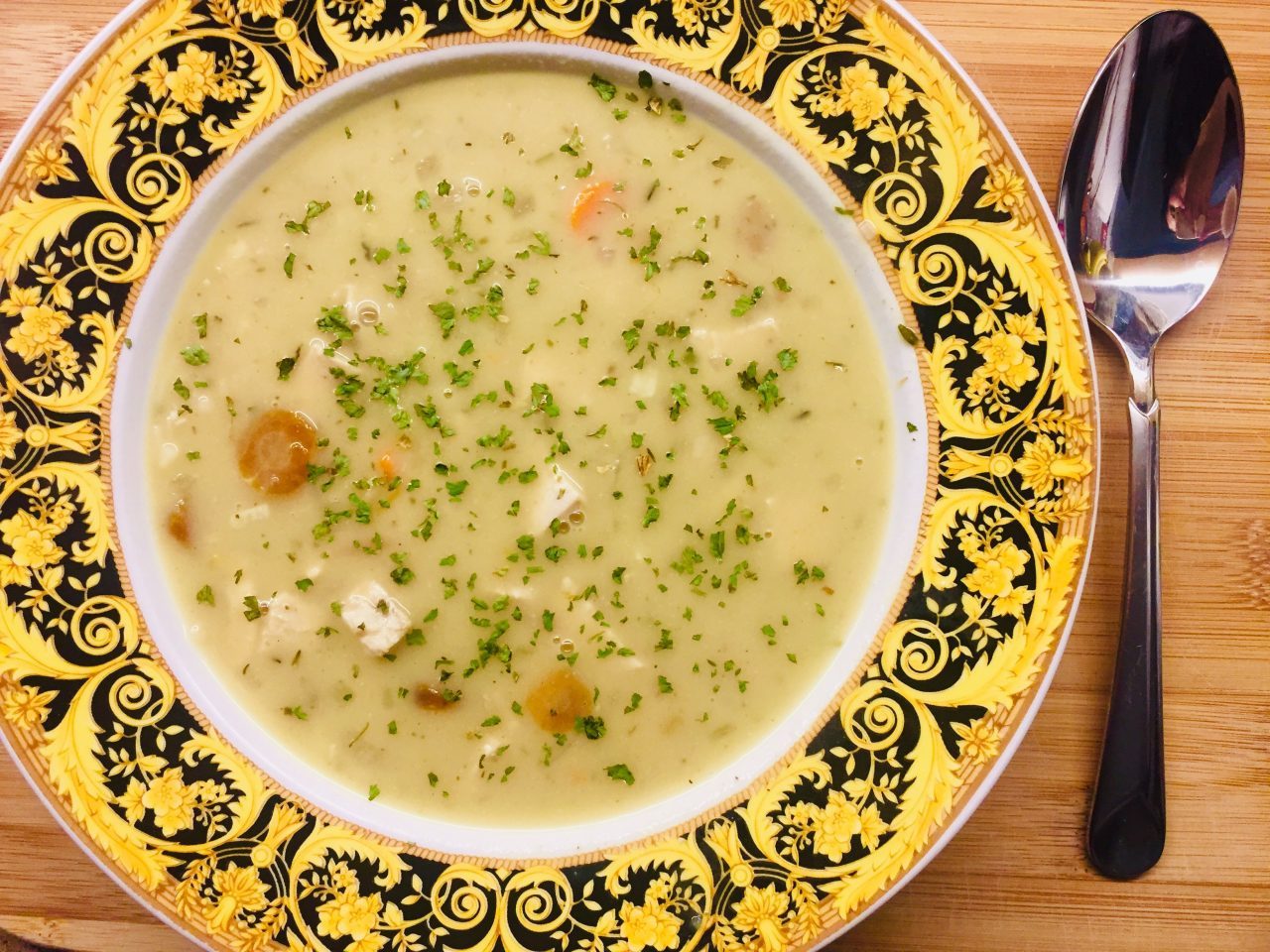 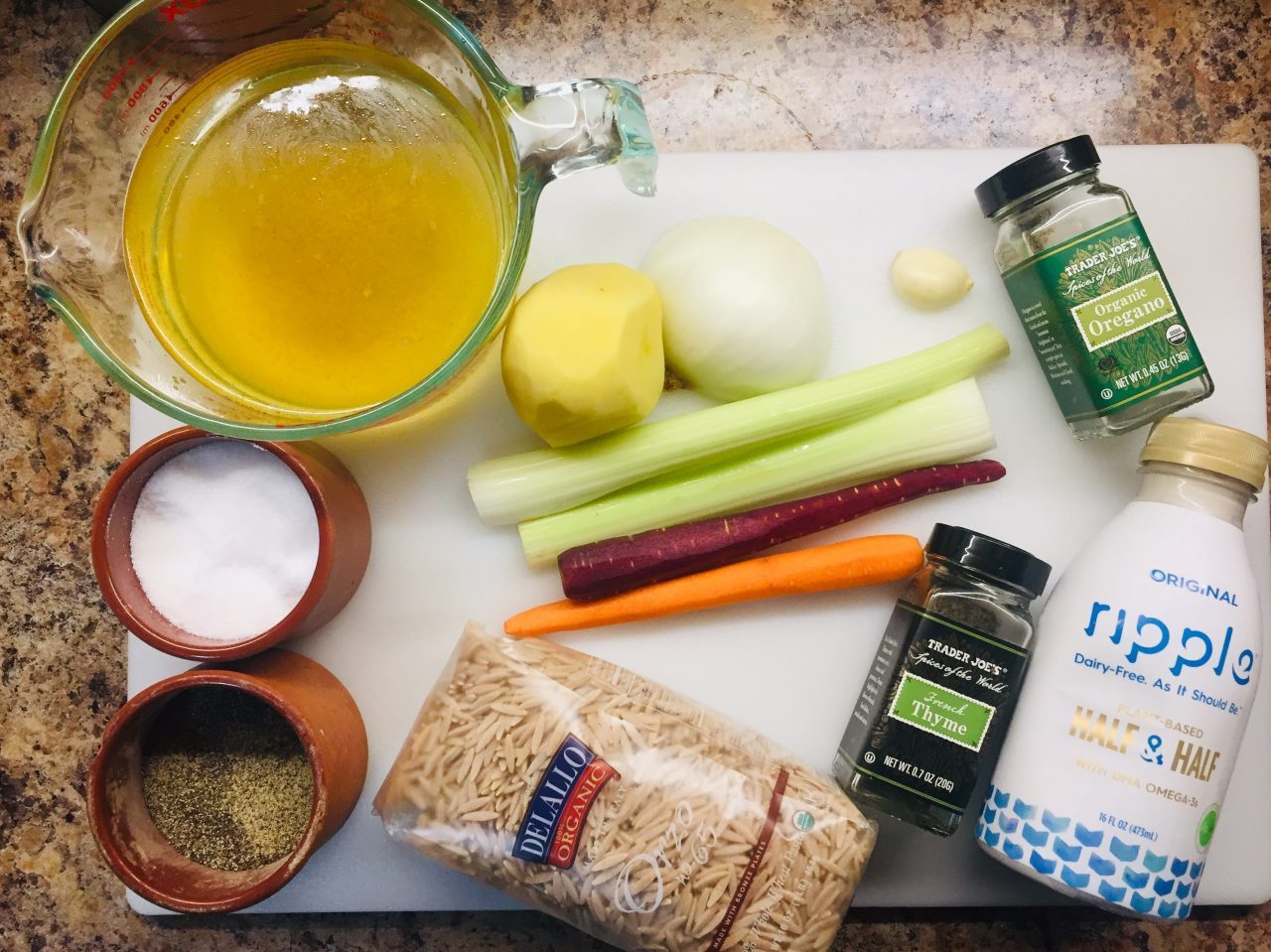 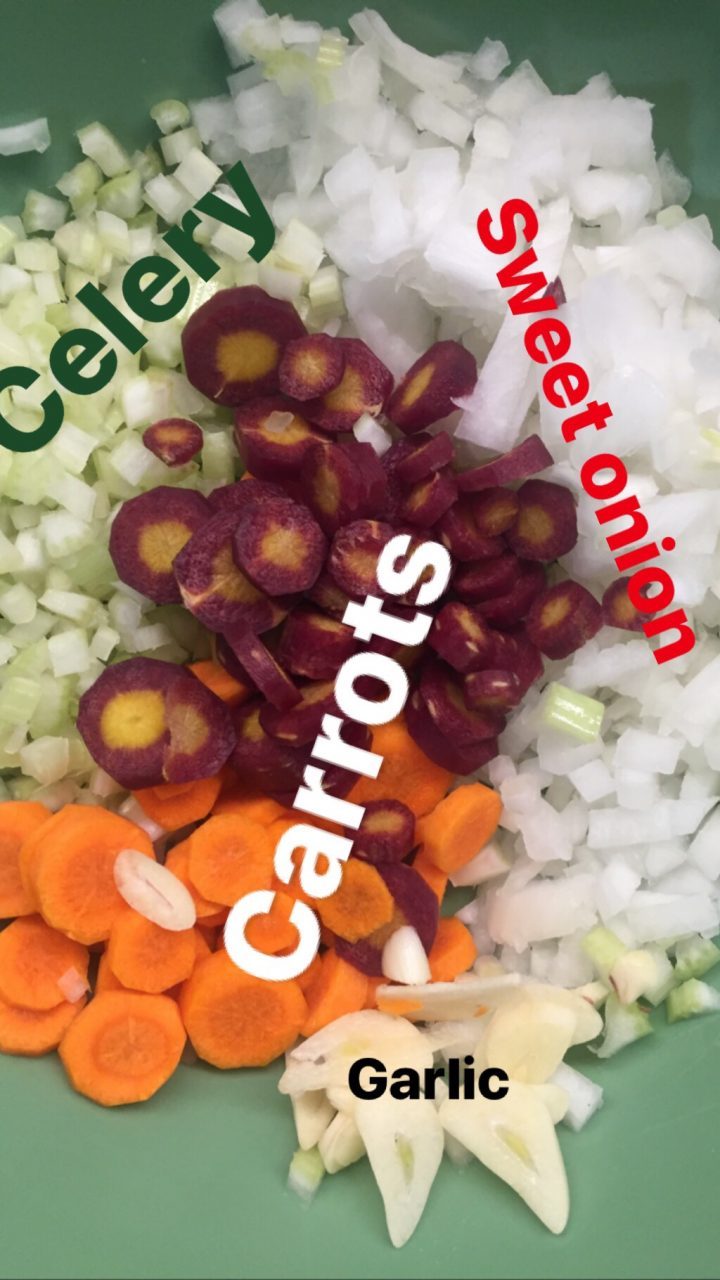 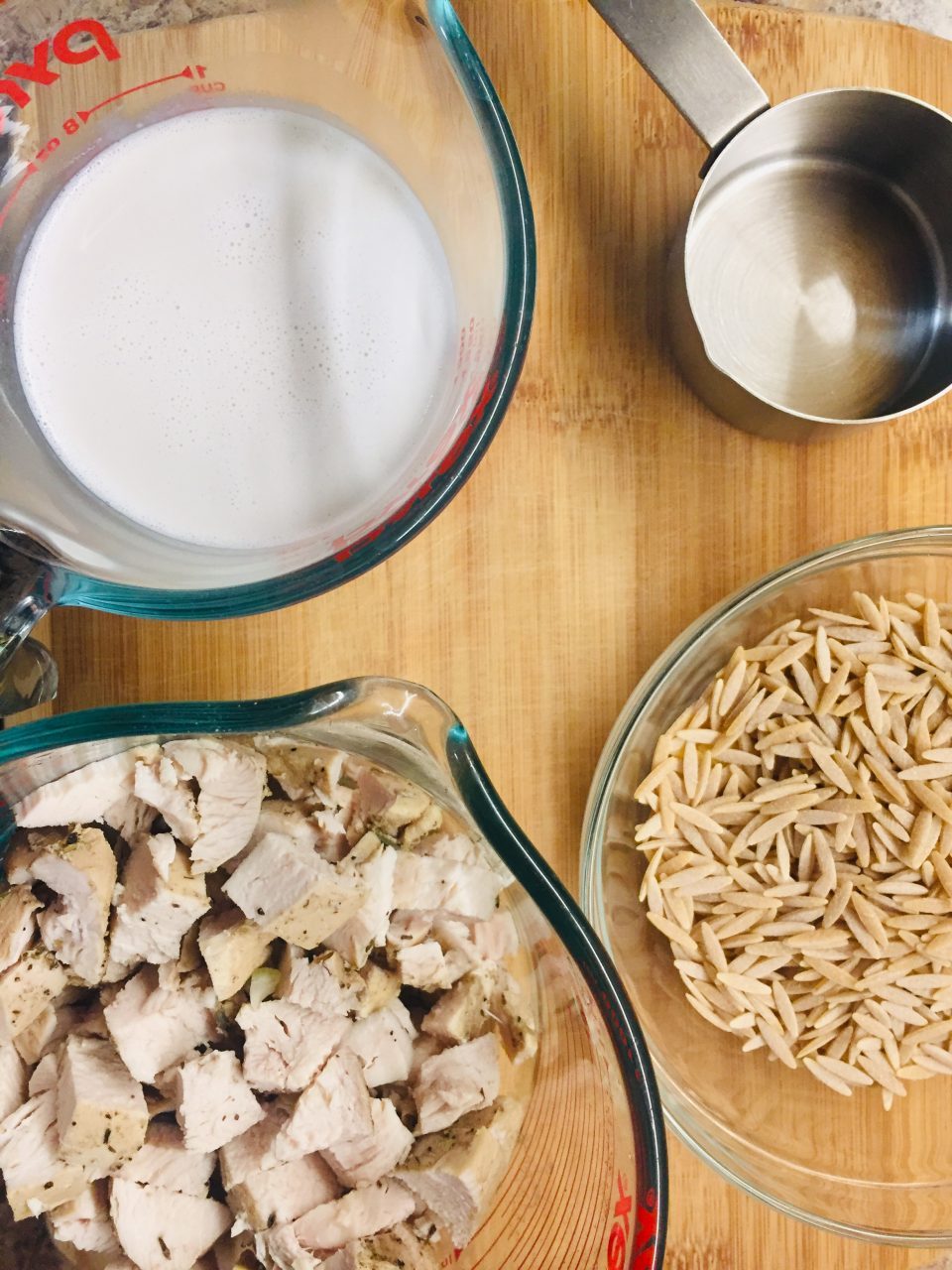 1 cup Ripple Original Half & Half

In a medium pot, heat oil and sauté onions, carrots, celery and garlic on medium heat for about 7 min until soft. Add flour and seasonings. Stir and cook for about 2 min.

Add chicken broth and potato. Bring to a boil. Cover partially and simmer on low for about 25 minutes. Add chicken, half & half and orzo. Taste soup and see if you need to add any seasonings. Bring to a boil again. Cover and simmer for another 10 min until orzo is al dente and soup has thickened. Enjoy!

*Leftovers can be stored in the fridge for up to a week. You may always add more broth to the soup if you feel like it’s too thick after sitting in the fridge, since the noodles and potato soak up liquid the more they sit. 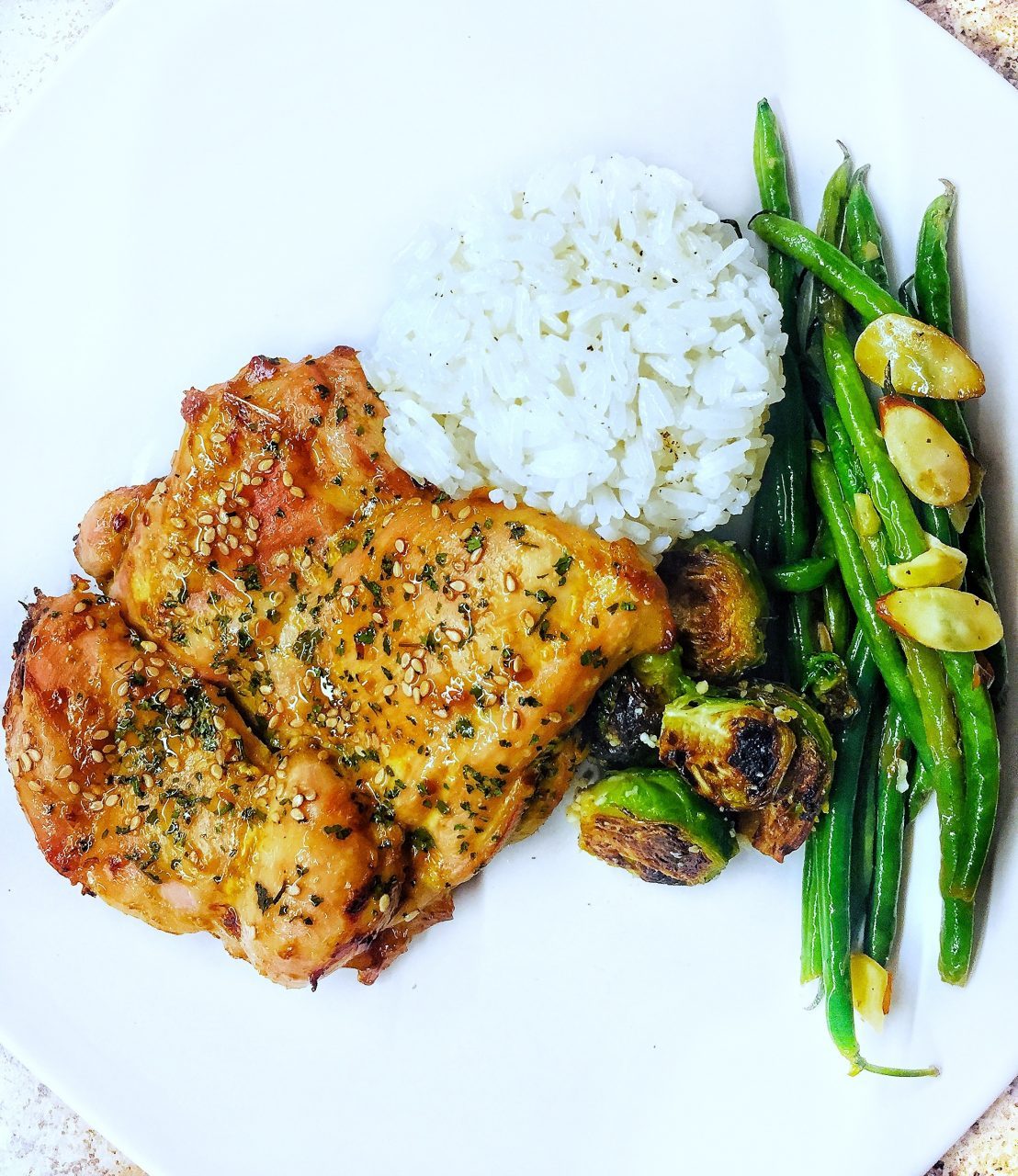 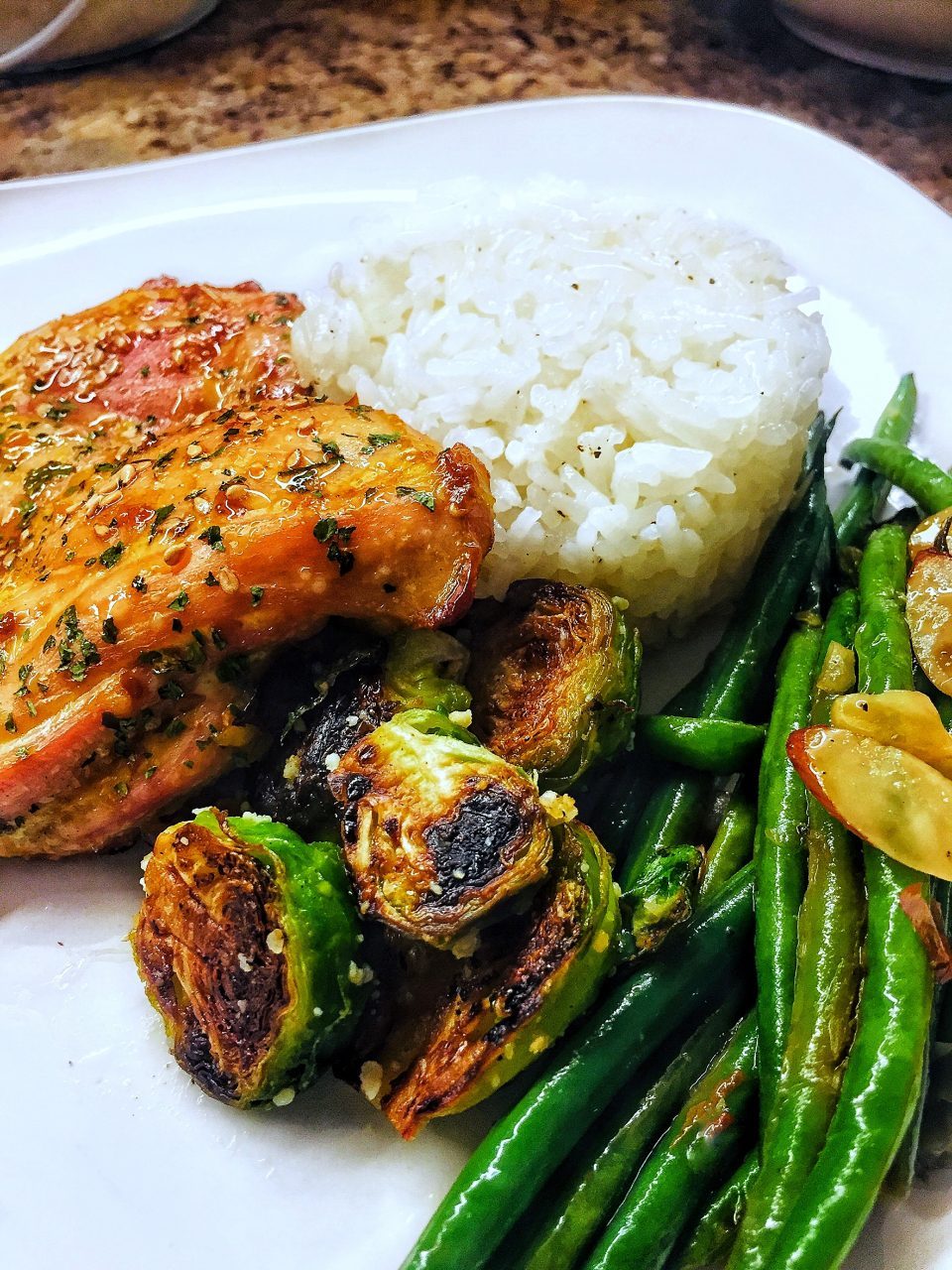 Mix all ingredients starting from the mayonnaise to turmeric. In a medium mixing bowl, place your chicken and pour the marinade over it. Using tongs or clean hands to make sure sure each piece gets coated generously. Refrigerate for at least one hour and maximum 8 hours.

Heat oven to 400°F. Line a large baking sheet with parchment paper and grease with cooking spray (I use Coconut Oil). Place all the chicken on the baking sheet and pour any remaining marinade over the chicken. Sprinkle with sesame seeds and dried cilantro. Roast uncovered for 30-35 min. Serve with Jasmine Rice and veggies. Enjoy. 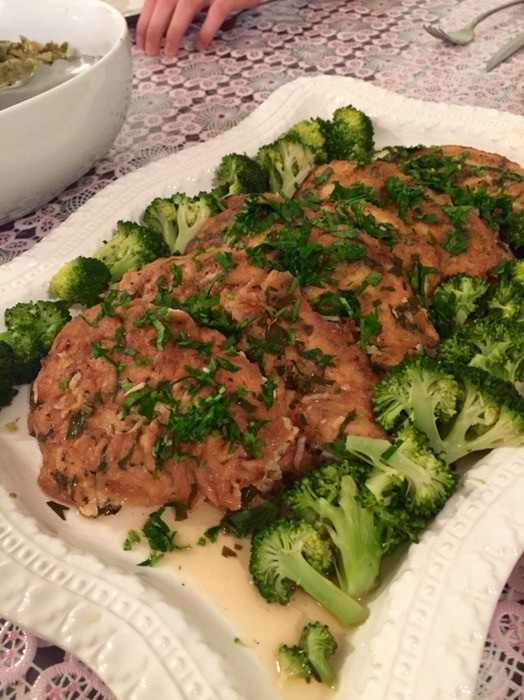 Salt and pepper to taste

4 Boneless, Skinless Chicken Breasts (Butterflied, pounded to 1/4″ thickness and cut in half)

3 Eggs plus 3 Tbsp of water (whisked)

Heat a large deep sauté pan with the avocado oil on medium/high heat.

Season your flour with salt, pepper, oregano and basil. Dredge chicken lightly in the flour. Set aside. Using 1/2 of the chopped parsley ( reserve the rest for sauce and garnish), whisk in to the egg wash. Dip chicken breasts into the egg wash and carefully lay it into the pan. Cook 2 min until golden brown, flip and cook an additional 2 minutes. Set aside on a plate. The chicken will finish cooking in the sauce.

Add the minced garlic to the pan and cook for about 20 seconds. Deglaze with the wine, scraping up brown bits with a wooden spoon. Stir in the broth, lemon juice and capers and allow to reduce for 2 minutes.

Add the lemon zest, parsley, vegan butter and swirl to emulsify. Place the chicken back into the pan with the sauce, close lid and cook for 15 min on low heat. Serve with favorite pasta, steamed broccoli, and a salad. Enjoy! 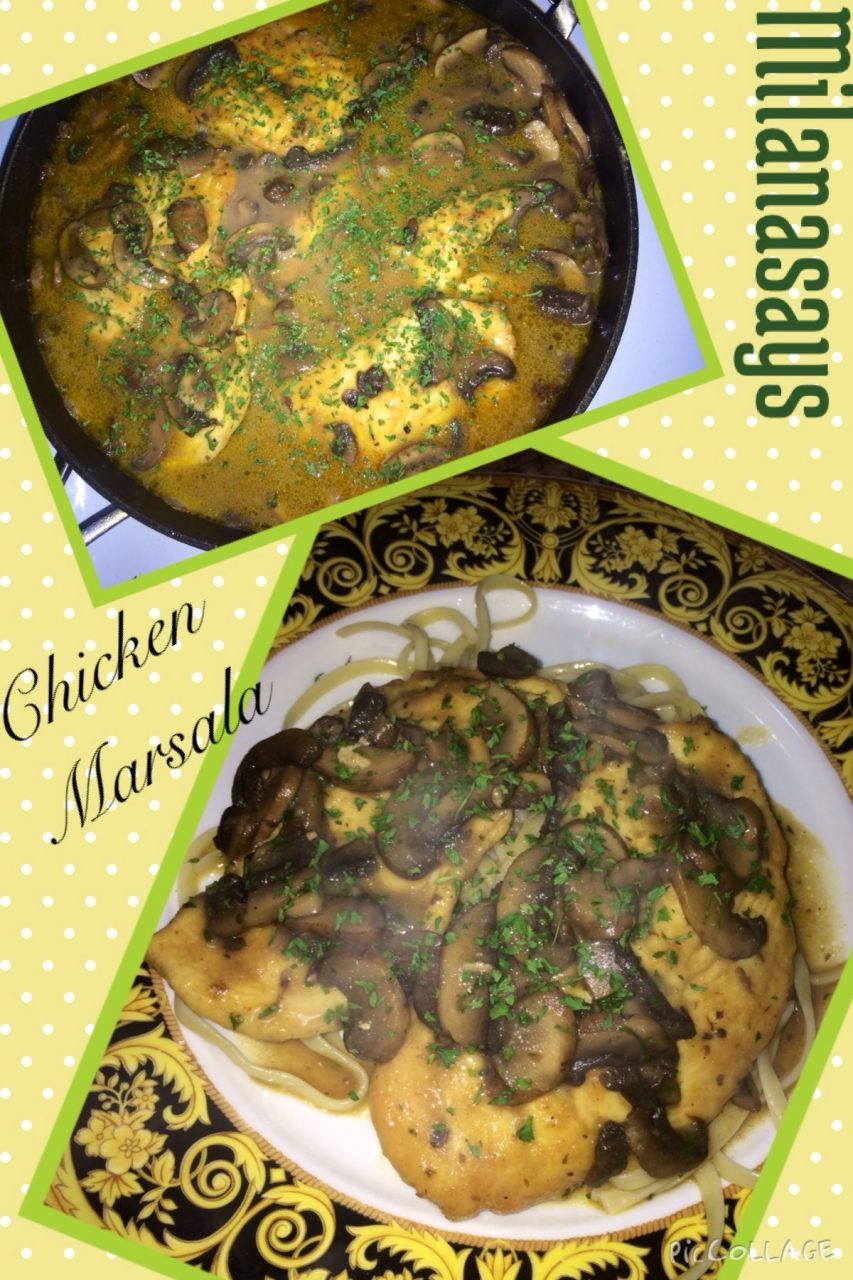 DIRECTIONS:
Butterfly chicken breast halves and pound thin. Cutting each Butterfly down the center to give you 2 thin chicken breasts.
In a shallow bowl or plate combine the flour and all seasoning spices and stir to combine thoroughly. Quickly dredge the chicken breast halves in the seasoned flour mixture, shaking to remove any excess flour.
Heat the oil in a large skillet over medium-high heat until very hot but not smoking. Add 1 tablespoon of the margarine and cook the chicken breasts until golden brown on both sides, about 3 minutes per side. Transfer to a plate and set aside. Add another Tbsp of the margarine to the pan and add the mushrooms. Cook, stirring frequently, until mushrooms are golden brown around the edges and have given off their liquid. Add the Marsala wine and bring to a boil, scraping to remove any browned bits from the bottom of the pan. When the wine has reduced by half, add the chicken stock and cook for 3 minutes, or until the sauce has thickened slightly. Lower the heat to medium and return the chicken breasts to the pan and continue to cook until they are cooked through and the sauce has thickened, about 5 to 6 minutes. Swirl in the remaining Tbsp of margarine. Garnish with chopped chives and serve with your favorite side. Enjoy! 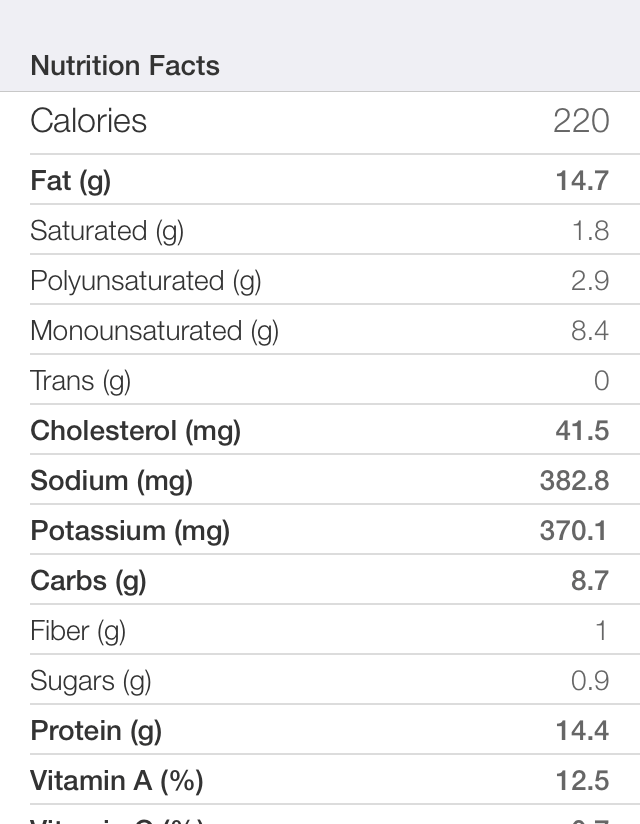 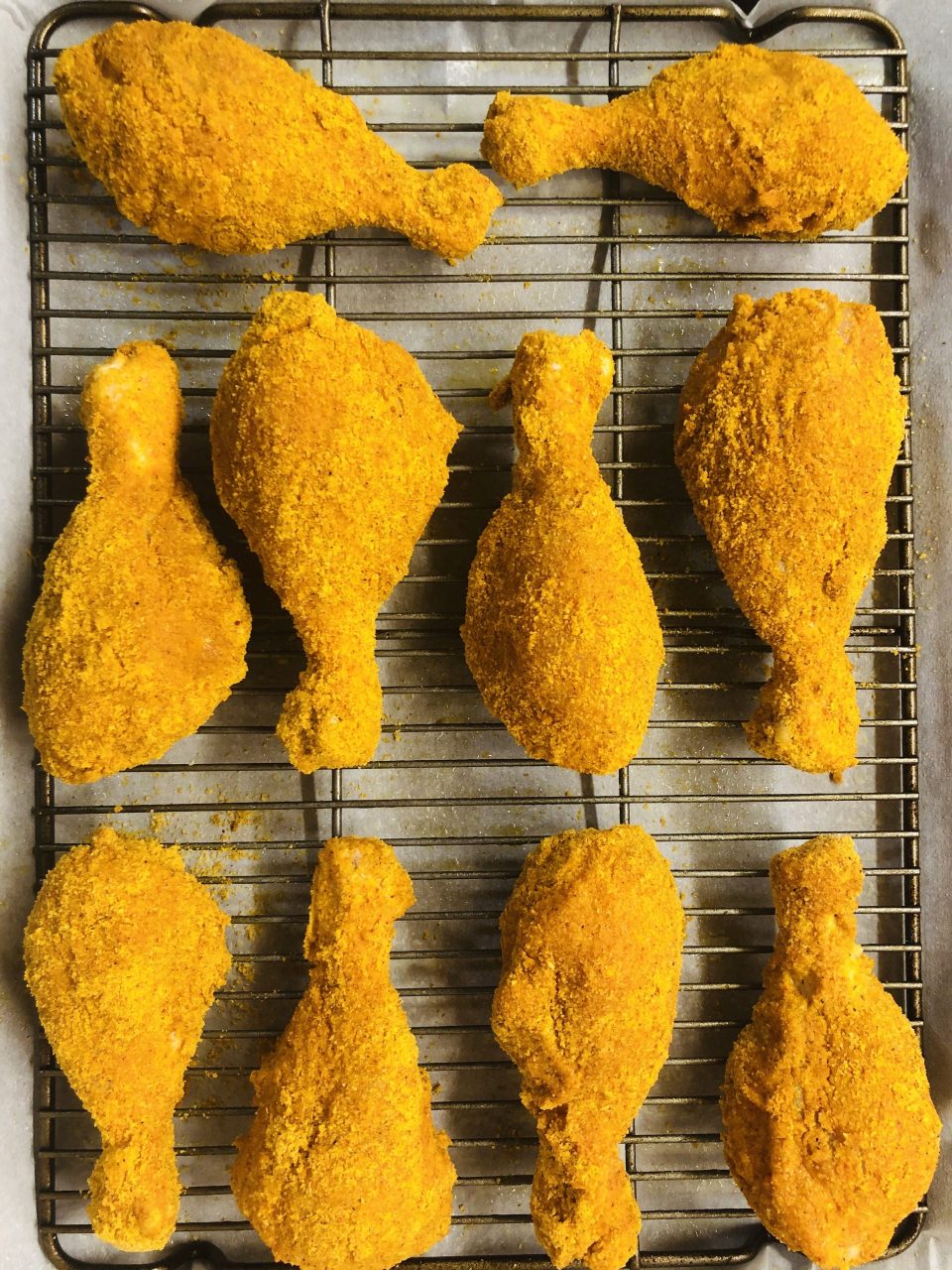 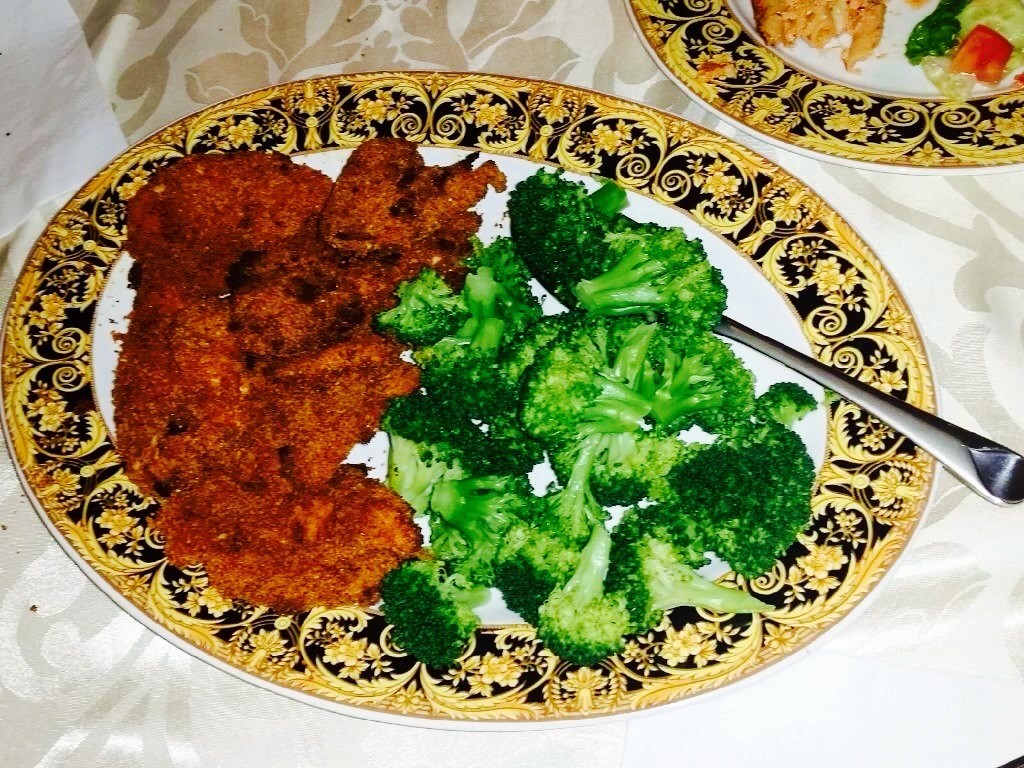 DIRECTIONS:
Using a grill rack over a baking sheet spray rack with cooking spray set aside. Meanwhile in a food processor combine all dry ingredient and process on high while pouring in the olive oil until incorporated completely. Pour into shallow dish. In a separate bowl beat egg whites. Dredge tenders or drums first into the whites and then press them firmly into the almond mixture covering all sides. Place them on the grill rack. For tenders, bake at 450°F for 20 min. For Drums, bake at 425°F for 40 min. Enjoy!

DIRECTIONS:
Heat 2 tbsp of oil in a large skillet over med-high heat. Once the oil is shimmering, add the mushrooms. Cook for 3-5 min and add the onions. Cook mixture until onions are soft, another 3 min or so. Add the garlic, thyme, and rosemary. Cook until the herbs and garlic are fragrant, about a min. Season to taste with salt and pepper. Remove from heat and allow to cool for a little while. Heat oven to 350F.

Meanwhile prepare the chicken breasts by butterflying, and pounding.

On your cutting board, place 2 pieces of kitchen twine down vertically. Place the prepared chicken breast on top of the kitchen twine so that there is a piece of twine at either end of the chicken breast ( the longest side of the chicken should be perpendicular to the kitchen twine). Spread some mustard evenly on the chicken breast then layer with mushroom stuffing mixture. Roll from left to right and secure with the twine. Trim the ends. Place rolls on a greased baking sheet. Spray rolls with cooking spray and sprinkle with Mrs. dash Chicken Spice and paprika. Bake for 30 min or until a meat thermometer registers 180F in the center. Remove from oven and cover with foil for 10 min. Snip off the twine before slicing. Guiltless Eating! 🙂 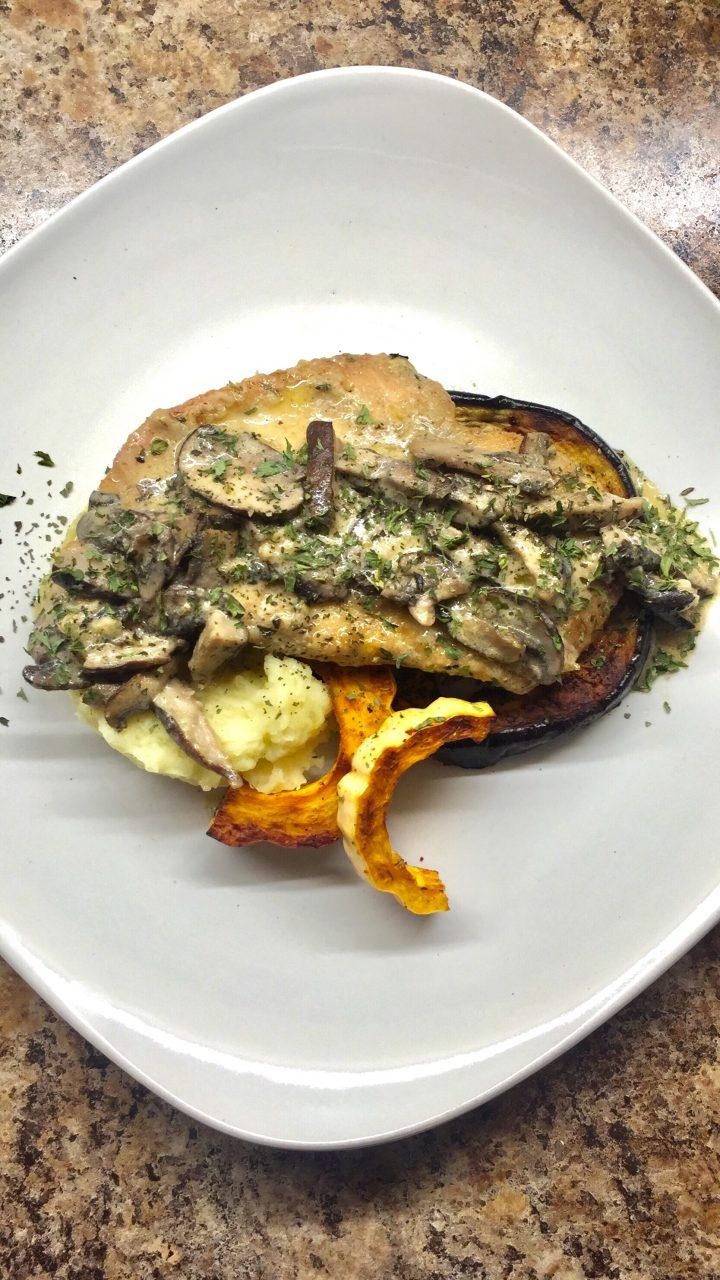 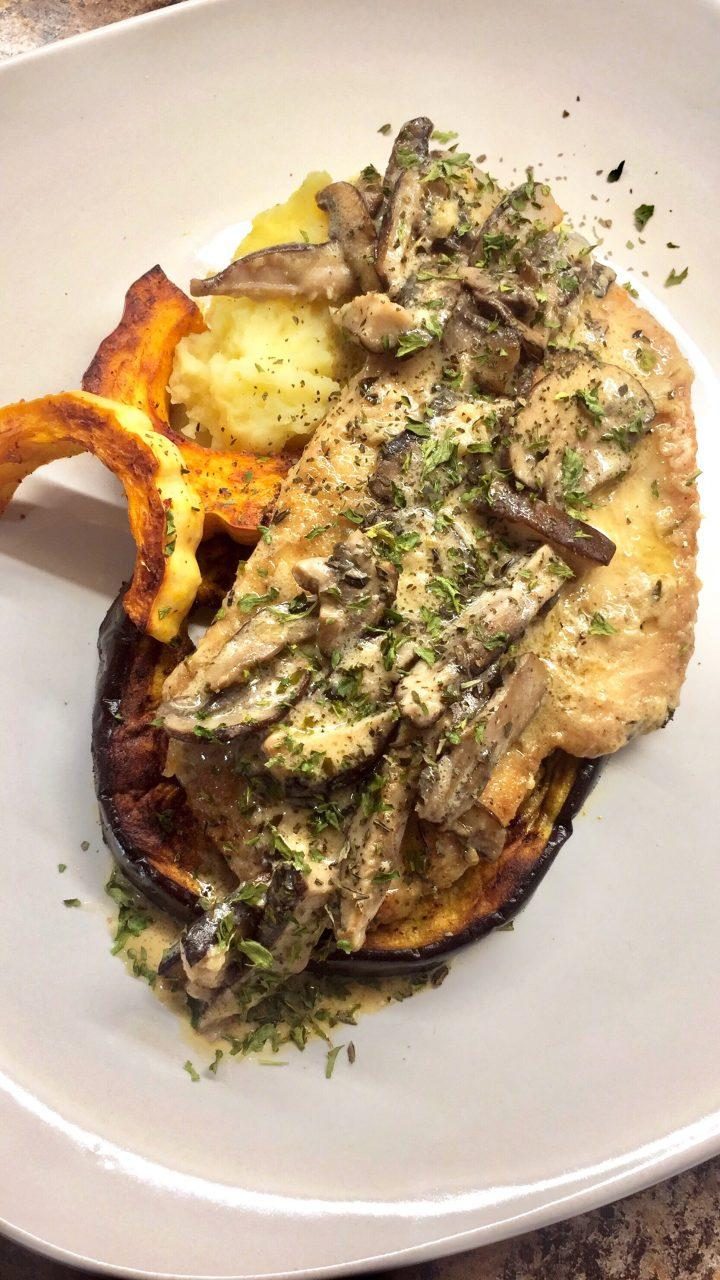 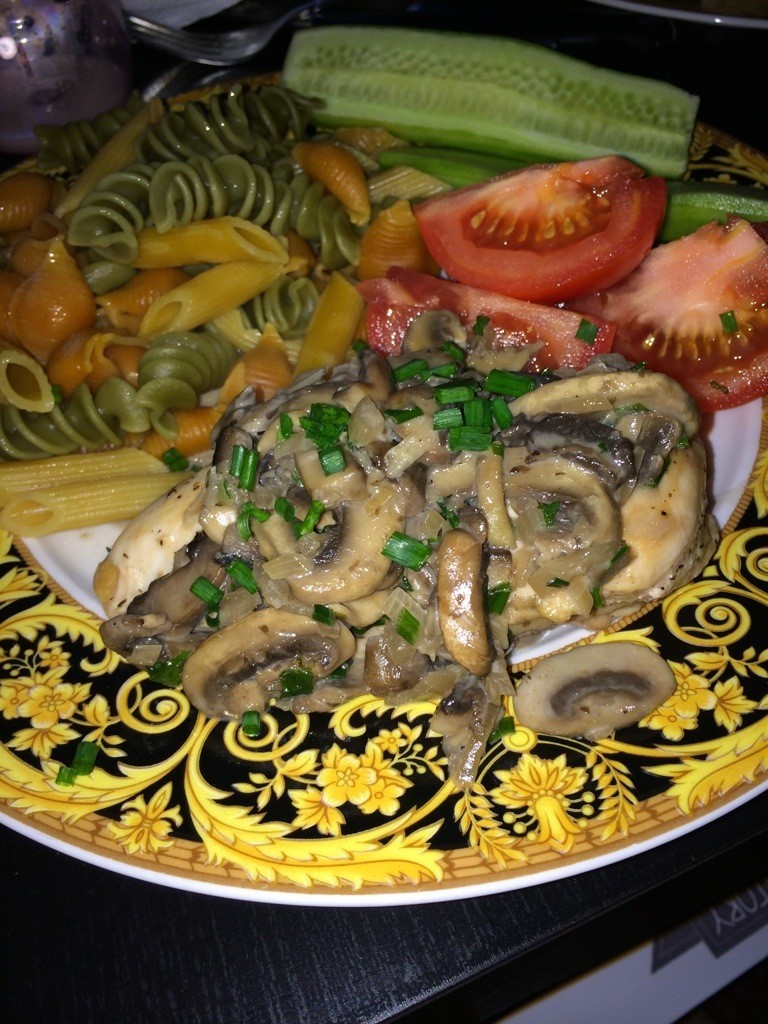 DIRECTIONS:
Heat oven to 400F.
Season chicken with pepper and salt on both sides.
Heat 2 Tbsp of oil in a medium skillet over high heat. Sear the chicken breast turning once and adjusting the heat to prevent burning, until brown. Transfer to a baking sheet and finish the chicken breasts in the oven for 20 min. Add another Tablespoon of oil in the same pan. Add shallots to the pan and cook, stirring, until fragrant and soft, about a minute or so. Add mushrooms; cook, stirring occasionally, until tender, about 2 minutes. Pour in vermouth (or wine); simmer until almost evaporated, scraping up any browned bits, about 1 minute. Pour in broth and cook until reduced by half, 1 to 2 minutes. Stir in creamer and chives (or scallions); return to a simmer. Return the chicken to the pan, turn to coat with sauce and cook until heated through, about 1 minute. Enjoy!